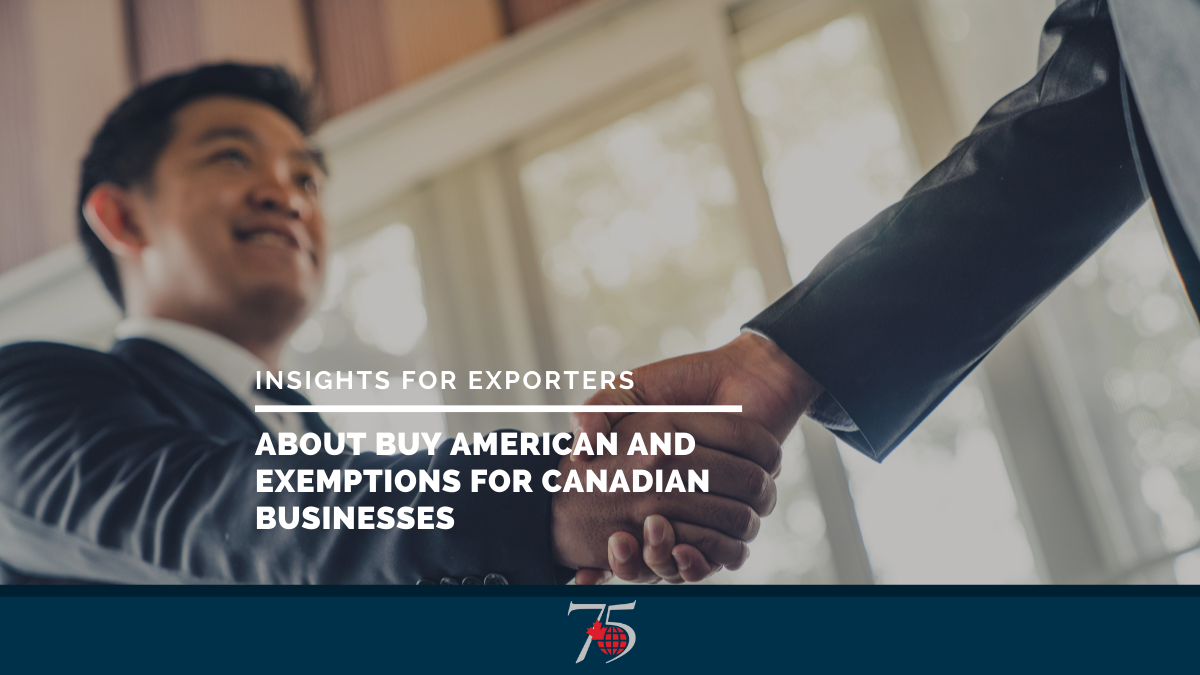 About Buy American and Exemptions for Canadian Businesses

Since President Biden took office and began drafting sweeping legislation such as the Infrastructure Investment and Jobs Act, Canadian exporters have been concerned about the impact of “Buy American” provisions on their access to the U.S. market. Fortunately, some sectors are just too critical to let protectionism get in the way — including and especially defence.

First, it’s important to clarify the difference between “Buy American” and “Buy America”. Buy America regulations refer specifically to buying iron, steel and other products used in infrastructure, and have to do with how U.S. states spend federally allocated funds. Buy American laws, on the other hand, apply to federal government purchases over $10,000 USD.

Buy American laws have been around since the 1930s. They’ve resurfaced recently among politicians fighting for their constituents in the global economic slowdown caused by COVID-19. But when it comes to contracts specifically related to defence and security, Canada gets special consideration given the integrated nature of the North American defence industrial base.

“Defence is its own unique circumstance in a lot of ways,” says Darren Boomer, Director, Contract Operations for CCC. “Canada is part of the North American defence industrial base, and the U.S. Department of Defense (DoD) needs access to Canadian solutions.”

Currently, the US government waives Buy American requirements for long-standing DoD bilateral reciprocal defence procurement agreements, such as the DPSA, as well as duty and fees on Canadian exports to the U.S. DoD.

Other Advantages for Canadian businesses selling to U.S. DoD

While Canada isn’t alone in benefiting from these special allowances — the U.S. has 27 reciprocal defence agreements with military allies — exporters in our country do enjoy a particularly advantageous position.

“Other countries envy Canada’s special status as a defence trade partner of the U.S.,” says Boomer. “Our two countries have bilateral industrial security arrangements. If Canadian firms bid on classified RFPs, their Canadian clearances count as equivalent to American ones.”

If you work in the defence sector, you may know this already. But companies outside the military sphere also have the chance to sell into the U.S. DoD. — and in many cases those opportunities are even easier to access because the security requirements for non-military purchases are lower.

In other words, the door is open for Canadian companies that want to increase their exports to the U.S.

There are a number of specific opportunity areas that Canadian firms may want to pay attention to, Boomer says. “Initiatives of North American interest such as NORAD renewal and the development of Arctic technologies are especially well suited to Canadian companies,” he says. “Developing technologies like AI (artificial intelligence) and quantum computing are also high on the U.S. DoD agenda these days. The same goes for sustainable technologies, as the U.S. government has identified climate change as a security risk.”

In recent years, through Executive Order and other actions, the U.S. has identified supply chain gaps and vulnerabilities and is looking to work with allies and partners to fill those gaps – presenting opportunities for Canadian suppliers.

CCC is embedded in the U.S. Defense Federal Acquisition Regulation Supplement 225.870 (DFARS) to act as the prime contractor for Canadian exporters awarded U.S. DoD contracts over USD $250,000.The CCC has spent the last 65 years working closely with the U.S. DoD to connect American military needs with Canadian solutions.

If you’re a Canadian defence company looking to sell to the U.S., check out our step-by-step Guide to U.S DoD Market Entry and take the first steps toward doing business with the U.S. DoD.

Read more about Buy American act defence contracts by reading this online content from the Trade Commissioner Service. Read another blog in this series: What makes government procurement markets so attractive?