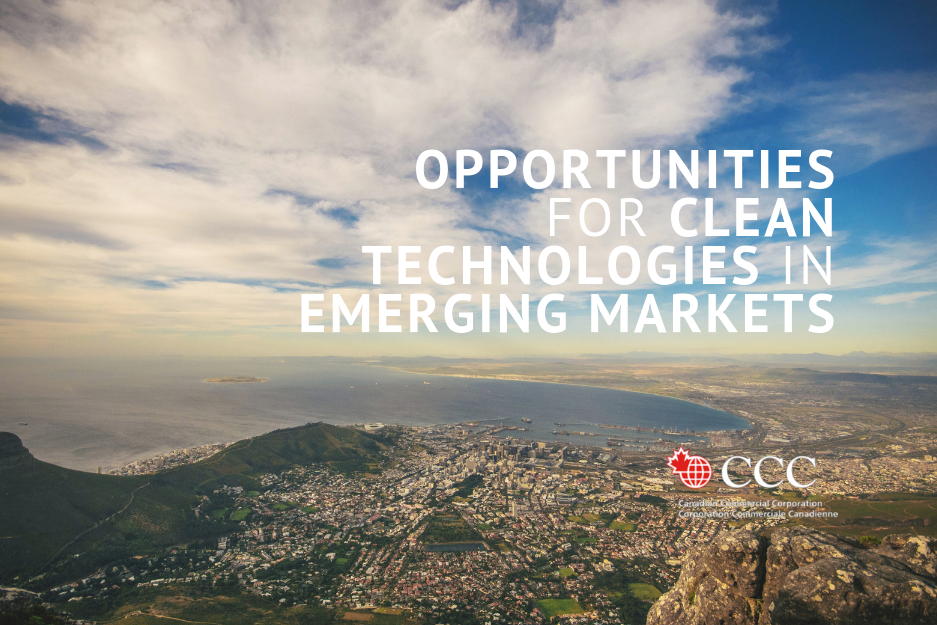 Opportunities for clean technologies in in emerging markets

In less than 10 years, emerging markets have leapfrogged from stuck-in-the-past power generation to becoming leaders in renewable energy production. That means more opportunities in more places for Canadian cleantech companies to do business and help drive the global clean energy transition.

A decade ago, clean energy was a niche market that depended on costly technologies only the richest countries could afford. Developing nations were assumed to have no choice but to rely on cheaper, dirtier energy sources like coal. They were largely overlooked by international cleantech suppliers because the potential rewards didn’t offset the risks of doing business there.

That’s all changed, according to last December’s Bloomberg NEF Climatescope report. In 2017, emerging markets installed more renewable energy capacity than fossil fuel-based capacity — at a ratio of more than 2 to 1 — and more than the rest of the world. A full 64% of 2017’s zero-carbon energy generation capacity was built in developing countries. These findings represent a massive shift since the first Climatescope report in 2011, when only 44% of new energy capacity in developing countries was renewable.[1]

“Countries that have been reliant on coal are now dealing with significant air quality problems,” says CCC Cleantech Sector Director Rob James. “Citizens want a cleaner environment. Governments want to avoid public health crises. And on top of that, a lot of these nations signed the Paris Agreement in 2015, and they’re serious about living up to their commitments to reduce carbon emissions.”

All of that, James says, means opportunity for Canadian exporters.

“Companies tell us that they need guidance in figuring out which climate finance funds they should pursue to fund their climate-related projects. Specialized Climate Finance Trade Commissioners can assist by providing information and qualified contacts for companies looking to develop projects such as renewable energy generation in developing countries” says  Jean-Philippe Linteau, Director for the Cleantech Sector at the TCS.

In fall 2018, the Government of Canada announced its Trade Diversification Strategy — targeting a 50% increase in exports by 2025. That goal can only be met by expanding beyond Canada’s primary trade partnerships with the United States and Western Europe. Exporters who act to seize on the cleantech opportunities in emerging markets will be directly supporting that strategy and have the government’s attention and support.

CCC is here to help you do that. The energy markets in many developing countries are not deregulated, with state-owned utilities the primary electricity purchasers. This makes them great candidates for government to government (G2G) contracts and CCC power purchase agreements (PPAs) that can help Canadian suppliers secure long-term revenue streams. These opportunities are especially promising in the Caribbean and Latin America, where Canada already has a longstanding history and trusted reputation in the electricity sector.

While fossil fuelled energy systems continue to be built and operated, James says the clean energy trend has reached a tipping point.

“The transition to a low-carbon economy and energy system is underway,” he says, “and it’s beyond the point where shifting political will can knock it off-course.”

Many countries, especially in markets that are new to renewable technologies or have leaders that de-prioritize climate concerns, still have significant fossil fuel-based infrastructure, with recently built coal plants that have years left in their useful service lives. But the trends are promising: when it comes time to decommission older energy generation facilities, countries are replacing them with renewable technologies. And the ever-improving economics of cleantech means they’ll continue to do so, regardless of political leanings.

With CCC support, Canadian exporters are well positioned to facilitate this transition and become market leaders in the renewable energy space.