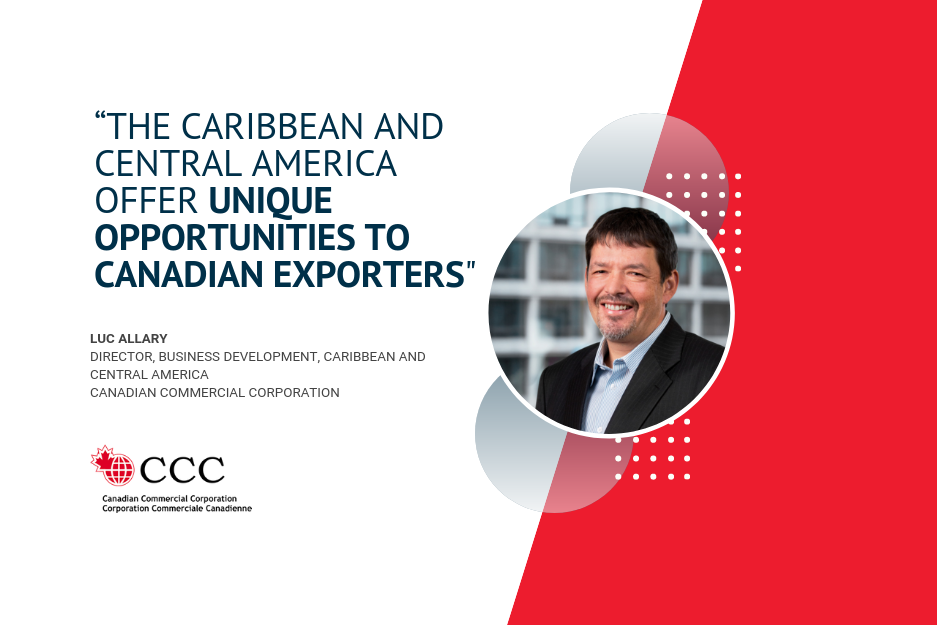 Where the “Canada Brand” is a competitive differentiator

In a competitive and cost-conscious market, being Canadian can count for a lot, says Luc Allary, CCC’s Regional Director for the Caribbean and Central America.

Luc Allary has spent most of his career working with people and governments in the Caribbean and Central America. He understands the challenges facing companies looking to do business in the region: small markets, difficult financial environments and — since the string of devastating hurricanes in 2017 — a lot of countries picking up the pieces.

Yet there are opportunities, too, and Allary is determined that Canadian companies not miss out on them. Canada’s strong reputation with governments throughout the region is an asset.

“Canada brings expertise, assurance and sense of fair play in trade to the negotiating table, and that has influence,” Luc says. “With a 70-year track record, CCC sells Canada’s integrity and quality, and we are getting more contracts signed as a result.”

That reputation is extremely valuable given today’s tough competition. Many governments in the Caribbean and Central America have limited resources and are quick to finance trade out of taxpayer-supported treasuries. Canada differentiates itself as a trusted partner whose companies will get the job done — something that goes a long way.

“That’s our value proposition,” Luc emphasizes. “We assure governments the job will get finished and the project will get delivered to their citizens.”

Luc started his career at the former Department of Energy, Mines and Resources. He moved on to Export Development Canada and has been at CCC for the past 15 years. Like many of his CCC colleagues, he brings broad deal-making experience to his role, which he sees as critical for connecting Canadian businesses with the right government resources at home and financing partners abroad.

“It takes a long time for a business to establish itself in the Caribbean and Central America,” he says. “A lot of people get involved when governments move projects forward. I love being on the ground and talking to foreign governments about buying from Canada. We have so much expertise to offer.”

Luc says Canada offers something unique with CCC’s government to government contracting approach. He also says the benefits of those contracts include growth for Canadian companies and the creation of jobs both in the region and at home in Canada.

“Six months into construction, the $274.4 million redevelopment of L.F. Wade International Airport in Bermuda has already created positive spinoffs for hundreds of Canadian and Bermudians companies. To date, the local population has performed 65 per cent of the work on the redevelopment, which has positively affected over 200 Bermudian businesses.” Luc says. “A water and storm sewer project in the Dominican Republic has resulted in a Canadian company expanding its business model and pursuing new business there. This work is great. When you win a deal, you’ve created jobs and had a positive impact both in Canada and these small markets. There’s nothing better than that.”

Are you looking to export to the Caribbean and Central America?
Contact CCC today to learn more about our government to government contracting model.