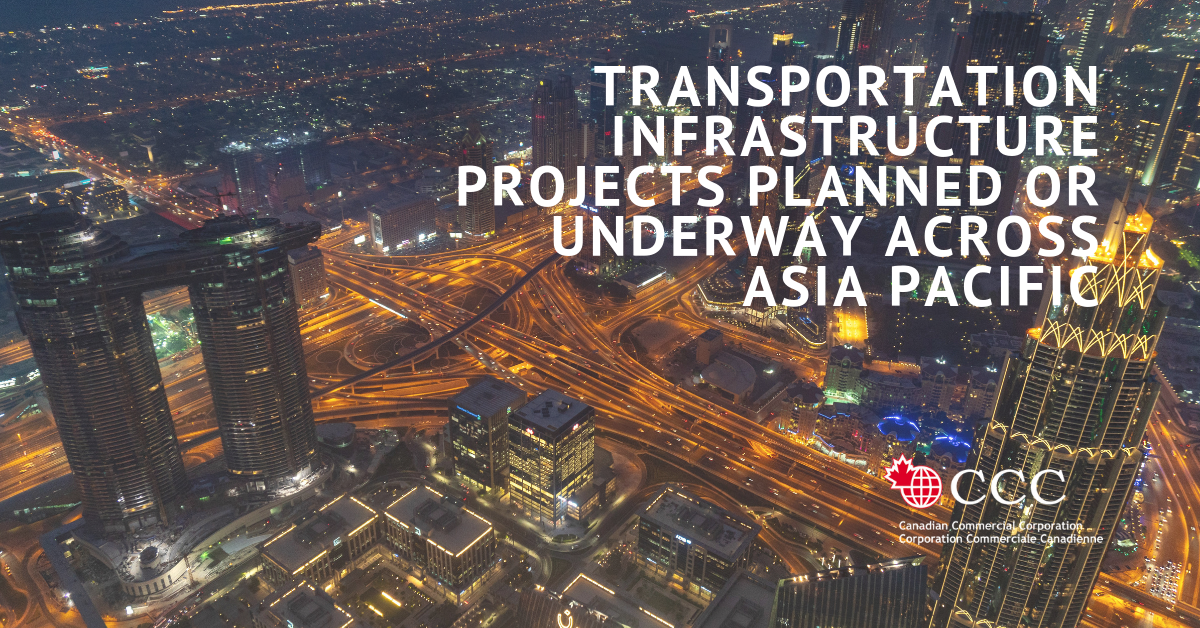 Numerous countries in the Asia Pacific region are investing in land, sea and air transportation infrastructure to make travel easier and ease the strain on overburdened systems. With a regional representative in Bangkok and a sector director focused on infrastructure, CCC is well positioned to help Canadian exporters engage with opportunities in the region.

Here are some of the latest projects to hit the news. (Source: IJGlobal)

195-km high-speed railway
The Government of Thailand will finance the construction of 193 km of high-speed railway through a USD $7.2-billion public–private partnership. The new railway will connect two international airports in the Bangkok region with another in Rayong, with trains set to run at speeds up to 250 km per hour. The railway is scheduled for completion in 2023, with service starting the same year.

670-km high-speed railway
A high-speed railway that connects Bangkok and Chiang Mai is planned following a provisional agreement between the Bangkok Metropolitan Region and governments in Chiang Mai province. The 670-kilometre railway will cost an estimated USD $13.46 billion to construct.

35- to 41-km light rail
Thailand’s Ministry of Transport will finance the construction of 35 to 41 km of light rail connecting Chiang Mai and Bangkok. The country’s Office of Transport and Traffic Policy Planning has proposed two plans for the project, which will affect the final scope of work and cost. One plan routes the trains underground, requiring six years to complete at a total cost of USD $3.23 billion. The alternate plan calls for road-level development, requiring three years to complete at USD $874.89 million.

60-km light rail
There are plans to build 60-km of light rail connecting northern Phuket Island, the Phuket International Airport, the city of Phuket and Chalong Circle. The estimated USD $754-million project will include the construction of 23 transit stations.

34.5-km mass rapid transit line
Thailand’s Mass Rapid Transit Authority is expanding Bangkok’s mass rapid transit metro service with a new 34.5-km line scheduled to open in 2020. The USD $1.70-million project is tied to a 33-year public–private contract that includes a construction period of 3.25 years. The scope of work involves design review, manufacturing supervision, installation and testing of all monorail and track switch systems until service starts, as well as the delivery of 72 four-car monorail trains.

Airport
Vietnam’s Ministry of Transport has announced plans to invest in the development and construction of an airport in the Long Thanh district of Dong Nai province. The estimated USD $5.4-billion project will place an airport about 40 km northeast of Ho Chi Minh City. The new airport is scheduled for operation in 2025.

31.5-km metro rail line
The initial phase of the Pune Metropolitan Region Development’s metro rail expansion project will create two new lines in Pune, the second largest city in the state of Maharashtra after Mumbai. That includes a 16.6-km line between the Pimpri and Swargate areas of the city along with a 15-km line between Vanaz and Ramwadi. The new lines will cost an estimated USD $974.24 million to construct.

Port
A new port will be built in Andhra Pradesh to take over the handling of bulk cargo from Visakhapatnam Port, which will help reduce pollution in Visakhapatnam. Located 120 kilometres south of the existing port, Bhavanapadu Port will expand Andhra Pradesh’s seaport capacity significantly. The estimated value of the project, which includes port development and operation, is USD $472.17 million.

International airport
Maharashtra’s City and Industrial Development Corporation has awarded USD $2.2 billion to an India-based conglomerate to build infrastructure for a new international airport in Navi Mumbai. The airport will be Mumbai’s second and is expected to handle 10 million passengers a year in its initial phase, which starts in 2019. The firm will expand the airport over the next 10 years to serve 60 million passengers annually by 2030.

350-km high-speed railway
A planned 350-km high-speed rail line will greatly reduce travel time between Malaysia and Singapore — down to 90 minutes from six hours. Estimated to cost USD $15 billion, the line will include two terminus stations in Kuala Lumpur and Singapore and five transit stops in Malaysia’s Negri Sembilan state. The joint procuring authorities are MyHSR Corporation (owned by the Malaysian Minister of Finance Incorporated) and SG HSR (a subsidiary of Singapore’s Land Transport Authority). The authorities will award the preferred bidder 30 years of rolling stock under a design, build, finance and maintain (DBFM) structure. The contract also includes operation of rail assets, including track work, power, signaling and telecoms.

CCC is looking for Canadian exporters targeting the Asia Pacific region. If you’re involved in the construction or operation of railways, ports or airports, contact CCC at 1-800-748-8191 or email info@ccc.ca.