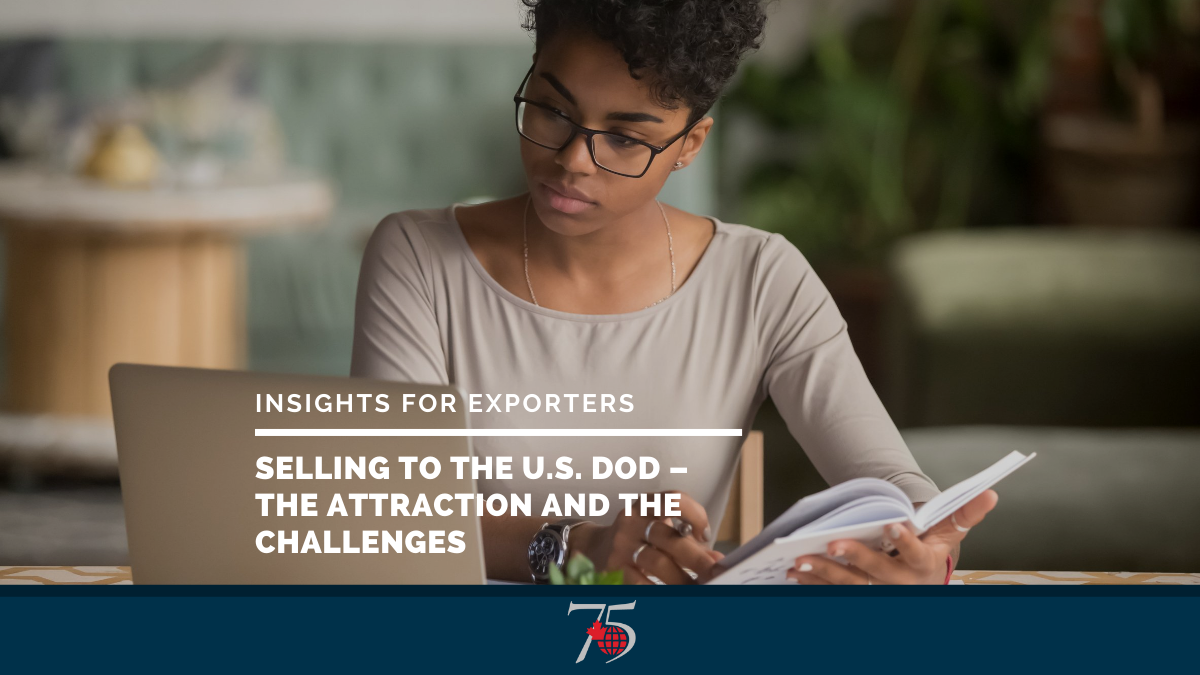 Selling to the U.S. DoD – the attraction and the challenges

The U.S. market is convenient for Canadian exporters — easy to access and familiar. And the U.S. Department of Defense (DoD) is one of the most sought-after buyers south of the border. What makes the U.S. DoD so appealing? And what should Canadian exporters know about it before pursuing opportunities there?

Many companies around the world would jump at the chance to sell into the U.S. DoD. At more than $700 billion a year, the United States spends more on defence than any other country — and is on track to spend $1 trillion in the year to come. But it’s not sheer spend that makes the DoD such a coveted customer. The Department is a disciplined buyer that pays reliably and writes detailed contracts with little margin for error.

“There’s no ambiguity or surprises when you deal with the U.S. DoD,” says Darren Boomer, Director, Contract Operations for Canadian Commercial Corporation. “That peace of mind is worth a lot to any exporter, and Canadian firms get double the reassurance with a government-to-government (G2G) contract with CCC under the Defense Production Sharing Agreement (DPSA).”

Getting on the radar with U.S. DoD

Canadian exporters looking to sell to the U.S. DoD should invest some time and effort in building up their brand profile and try to carve out a distinct niche, Boomer advises.

“I know of one Canadian company that was able to land a big contract because they were one of only two companies in the world with rights to use a particular chemical,” says Boomer. “They might not otherwise have been able to compete for that kind of contract, but they were a unique option.”

Not every company can aspire to that kind of product exclusivity, but Boomer says there are other ways to stand out. Because the U.S. DoD is always looking to find bleeding edge technology, having an innovative, future-facing solution is another path to differentiation and success.

“If you’ve got something truly novel, get it out into the marketplace and make some noise,” he suggests. “In a lot of cases, with the buzz, the DoD will come find you.” The U.S. DoD has many innovation programs to pull in and support the development of tech to meet their push for modernization. We’ll explore those further in a future blog.

By engaging directly with U.S. defense procurement offices, it’s possible for Canadian companies to prove that their product, service or technology exceeds current DoD specifications — and to have those U.S. DoD specifications changed. So the next time a call for proposals goes out, their offering will be tailor-made to meet the new requirements.

Maturity and meticulousness are a must to win U.S. DoD contracts

Working with a large customer like the U.S. DoD does also come with some challenges, Boomer notes. Its ultra-precise contracts can be so specific that smaller companies with less in-house contractual expertise might be at risk of missing a term or condition that could result in a costly penalty if not delivered on.

Part of what makes the American military so effective is its culture of high standardization: there is a prescribed, repeatable way of doing virtually everything. As a result, U.S. DoD contracts have had the same format and style for years, with very specific (and sometimes old-fashioned) language.

“They require specific fonts and even the use of specific pencils on hand-written forms,” Boomer explains. “Instructions need to be followed exactly. Most defence companies are used to this, but the whole procurement and contracting approach might come as a shock to an agile, efficiency-oriented software firm.”

Competition on a whole other level to win U.S. DoD contracts

Networking is also critical to success with the DoD — and this often marks the difference between Canadian and American companies. Canadian companies tend to believe the strength of their offering will draw customers, while American firms understand the need to hustle to capture the attention of potential buyers.

“Canadian companies need to ensure they’re competitive in every aspect of the sales process,” explains Boomer. “In the boardroom, on the golf course, everywhere.”

As prime contractor to U.S. DoD for all contracts over USD $250,000, CCC has spent the last 65 years working closely with the U.S. DoD to connect American military needs with Canadian solutions. Whether you’re bidding on a contract, about to be awarded one, or just starting to explore the possibilities of selling to the U.S. DoD, CCC can help.

Under the Canada-U.S. Defence Production Sharing Agreement (DPSA), CCC helps Canadian exporters to compete for contracts with the U.S. DoD on an equal footing with U.S. suppliers. We have decades of experience supporting Canadian companies to succeed in this market.

Check out our step-by-step Guide to U.S DoD Market Entry and take the first steps toward doing business with the U.S. DoD.   Next blog in this series: Market Watch: Infrastructure projects during COVID and beyond