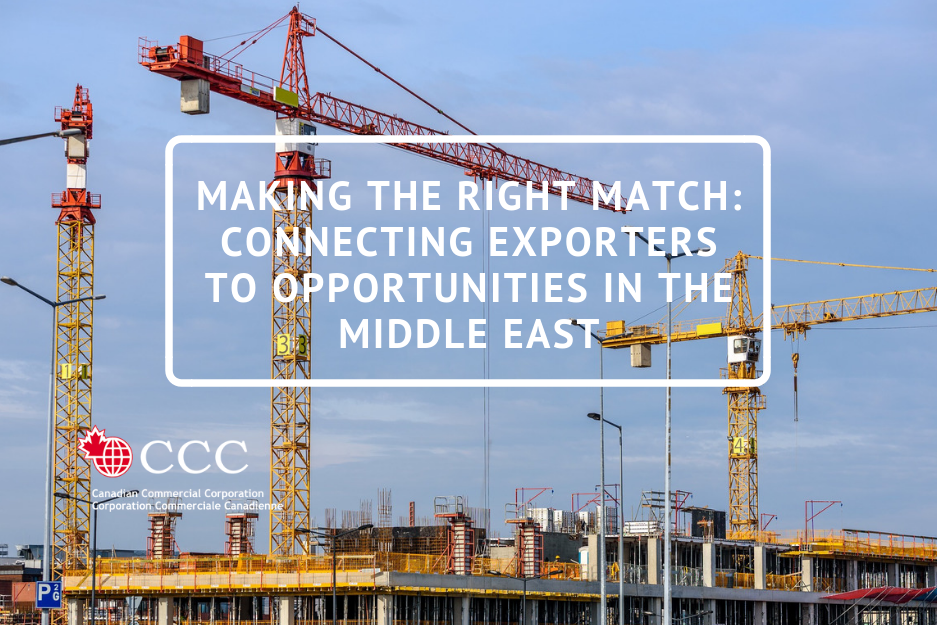 Making the right match: connecting exporters to opportunities in the Middle East

Use the word “retirement” around Michael Cessford and he might ask, “What’s that?” After a 35-year career with the Canadian Armed Forces and another six in private-sector business development, Michael now applies his unique skills as CCC Regional Director for the Middle East, working out of the Canadian embassy in Abu Dhabi, United Arab Emirates.

“I’m a matchmaker and deal-closer,” he says. “I connect Canadian exporters with Middle Eastern government-buyers and do everything I can to get them to a signed deal through CCC’s government to government contracting approach.”

Whether meeting with procurement decision-makers in the region or bringing them to Canada to introduce them to companies here, Michael is a tireless advocate of Canadian expertise and innovation. He says the opportunities in the Middle East are enormous. The Gulf states alone have US$2.8 trillion in sovereign funds waiting to be spent on government projects. Middle Eastern governments have solid strategies for growth and are spending money to advance many sectors, including healthcare, technology and security. Most recently, Michael’s focus has been on generating Canadian business opportunities for the delivery of health care, public safety, accommodation and other services during the 2022 soccer FIFA World Cup in Qatar.

His approach is decidedly pragmatic. That’s no doubt a by-product of extensive private-sector experience coupled with a challenging military career.

“I have a good sense of the operational environment and know what it takes to get a business development campaign across the finish line,” he says.

Michael admits the Middle East is not for the faint of heart. As he has learned living there off and on since 1995, it is a complex environment with security challenges, multiple languages and diverse cultures and religions. Asked if there’s any one bit of advice he’d pass on to Canadian exporters, Michael says doing advance analysis is important — and a key piece of what CCC brings to the table.

“This is definitely an environment that has to be navigated strategically and with a high degree of precision,” he reflects. “CCC knows how to do that to give Canadian companies a competitive advantage.”

“No company should ever jump into any market cold,” he notes. “But here, where internal dynamics date back thousands of years, you really improve your chances of success by preparing and connecting with people who know the lay of the land.”