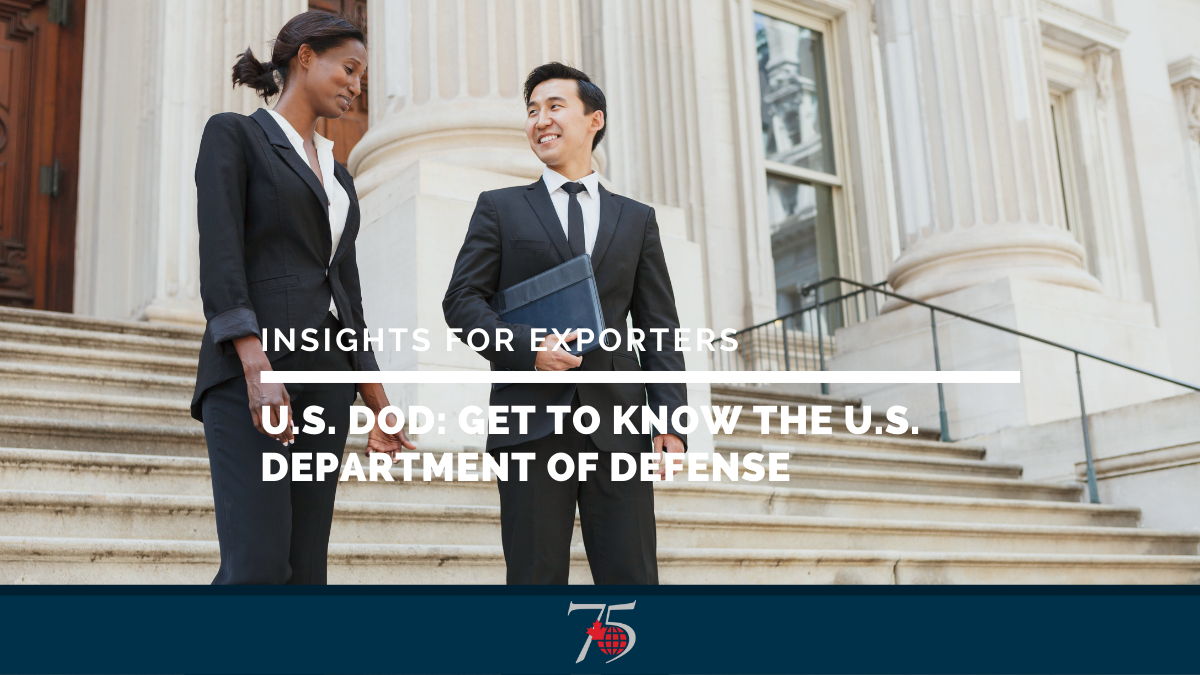 U.S. DoD: Get to Know the U.S. Department of Defense

U.S. DoD contracts are awarded regularly to Canadian companies that take the time to learn about the Department, how to work with the U.S. military, and how to use the help available to them to navigate the U.S. government procurement process.

This article will guide you through everything you need to know about the size and scale of the opportunities available to Canadian-based U.S. DoD contractors. You’ll also learn how the public procurement process works and how you can leverage it to help grow your business.

The Department of Defense (DoD) is the United States’ largest government agency and the largest employer in the world, with a current annual budget of $740.5 billion, supporting 2.91 million service members and civilians spread across 4,800 sites in over 160 countries. In essence, the U.S. DoD is the world’s largest “company”, representing a huge opportunity for both domestic and international contractors of all types.

The U.S. DoD organizational structure also consists of a Joint Chiefs of Staff (JCS), which is a group of senior uniformed leaders who advise the Secretary of Defense, the Homeland Security Council, the National Security Council, and the President on military matters. The JCS is composed of a Chairman, Vice Chairman, Senior Enlisted Advisor to the Chairman, and the Chief of National Guard Bureau as well as Military Service Chiefs from the Army, Marine Corps, Navy, Air Force, and Space Force.

Branches of the U.S. Military

The U.S. DoD controls five of the six branches of the military—Air Force, Army, Marine Corps, Navy and Space Force—with the Coast Guard reporting into the Department of Homeland Security.

The oldest service in the military, the Army is the land service branch of the United States Armed Forces, providing ground forces to protect the United States and its global allies. It also protects U.S. installations and properties around the world. Additionally, each U.S. state has its own Army National Guard, which is in fact a requirement of the U.S. Constitution (making it unique in this regard).

The Marine Corps or U.S. Marines is the maritime land force service branch of the United States Armed Forces, and is often the first branch deployed on the ground in combat. They are trained for both land and sea combat, with their own infantry, armor, artillery, aerial, and special operations forces.

The maritime services branch of the United States Armed Forces, the U.S. Navy conducts missions primarily by sea but also by air and land. By far the most powerful navy in the world, its core mission is to secure and protect the world’s oceans to foster safety for travel and trade.

The newest branch of the military and sister-branch to the U.S. Air Force, the U.S. Space Force organizes, trains, and equips space forces with a view to protecting the interests of the U.S. and its allies in space.

The United States Coast Guard (USCG) is the maritime security, search and rescue, and law enforcement service branch of the U.S. Armed Forces. Unlike the other five military branches, USCG operates under the Department of Homeland Security. Both a humanitarian and a security service, the Coast Guard has jurisdiction in both domestic and international waters to conduct rescue operations, law enforcement, and drug prevention as well as clear waterways.

Lastly, the U.S. DoD has 11 Unified Combatant Commands that include units from two or more service branches of the U.S. Armed Forces. These joint military commands conduct broad and continuous missions and are organized either geographically or functionally: 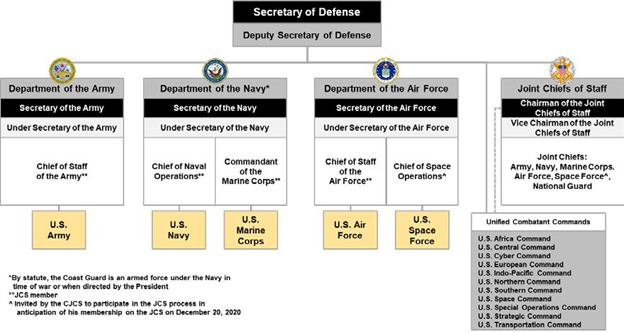 U.S. Military Spending as a Percentage of GDP

When it comes to military spending as a percentage of GDP, no other G7 country came close to the United States, who in 2020, spent an eye-popping 3.7% of their ~$21 trillion GDP on defence, according to SIPRI. Having said that, total U.S. defence spending is currently below its historical average as a share of GDP and, as a percentage, is projected to decline further: 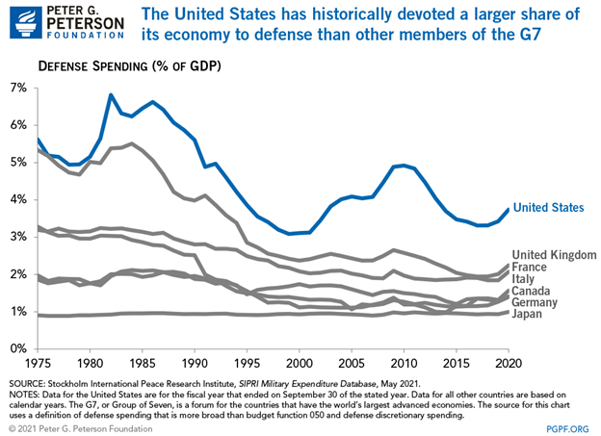 (U.S. Defense Budget by Year as a % of GDP)
Source: https://www.pgpf.org/budget-basics/budget-explainer-national-defense

In summary, here are 10 key U.S. military spending statistics demonstrating the scale of the opportunity available to domestic and foreign contractors selling into the U.S. DoD:

The U.S. DoD spends billions of dollars on contracts with domestic and foreign suppliers every year. There is a common misconception that the department only issues contracts to large companies in defence and closely adjacent sectors, but nothing could be further from the truth.

Before getting into the breadth of what the U.S. military is acquiring through contractors, let’s have a look at the sheer scale of the opportunity available to savvy businesses seeking to grow exports via U.S. DoD contracts.

The annual amount spent on U.S. DoD contacts has steadily increased since 2015 and, in 2020, skyrocketed to $421.3 billion—a dramatic 41% increase over the previous year. This increase coincided with a surge in product spending and traditional contracts being partially displaced by a spike in Other Transaction Authority (OTA) agreements as a means of conducting research and development. Also of note in 2020, U.S. DoD contracting obligations rose to nearly 58% of the total defence budget—the highest share devoted to contracts in two decades. 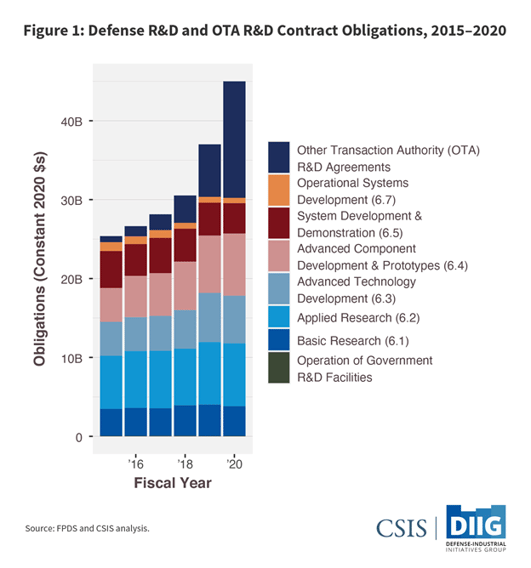 Having established how much the U.S. DoD is spending annually on contract obligations, it is important for would-be contractors to understand where that money is being spent and where the greatest opportunities exist.

While the top spending categories are in defence-adjacent areas such as armored vehicle, tank, and aircraft manufacturing as well as navigation and nautical systems, there are billions of dollars spent every year on a wide variety of non-military goods:

You Don’t Have to Be a Defence Company to Sell to the U.S. DoD

Even if your business isn’t directly involved in the defence sector, there is still a huge opportunity to grow your exports by selling to the U.S. DoD. Read our recent article to learn how the world’s largest ‘company’ is a buyer of virtually everything, from construction to surgical equipment and everything in between. Learn More

Just as the U.S. DoD contracts extensively with non-defence companies, so too does it award contracts to non-U.S. suppliers, including those based in Canada. Existing agreements give Canadian companies almost full access to U.S. military procurement opportunities. In fact, defence export sales to the U.S. from Canada reach $2.6 billion in 2018.

Again, while the top-spending areas were the usual defence-specific categories one might expect, a significant percentage of contracts awarded to Canadian companies spanned the gamut of non-military supplies, from medical and wireless communications equipment to computer-related services and monorail systems.

The future looks just as bright for Canadian companies looking to sell into the U.S. DoD, with spending likely to increase in the coming years in both traditional and non-traditional categories. Constantly looking to broaden its North American supply base, the U.S DoD is always looking for reliable Canadian companies with which to contract. Many Canadian companies may not even know that the product or service they offer is sought-after by the U.S. DoD—think shoe stores, vehicle part manufacturers, software publishers, office furniture manufacturers, and more. But how do you know whom to sell to, what they’re looking for, and how to give your firm the best chance of winning the bid? …

Because U.S. DoD procurement is complex and decentralized (for starters, there are 22 different procurement organizations), it can be daunting for companies new to the process to get started. Understanding the basics is a good first step to help ensure that your interactions with the U.S. military go as smoothly as possible.

From there, each individual armed service executes its own defence procurement and is supported by distinct procurement offices. In turn, each of these offices has a number of sub organizations that handle specific types of procurement.

Here are some of the key offices Canadian contractors should be aware of, including links to each U.S procurement website:

Broadly speaking, the Federal Acquisition Regulations (FAR) govern U.S. Government purchases. The U.S. DoD also has supplemental regulations known as the Defense Federal Acquisition Regulation Supplement (DFARS). These specific regulations are based upon U.S. DoD policy and/or U.S. law. To gain a better understanding of the DFARS, it’s a good idea to familiarize yourself with the complementary Procedures, Guidance, and Information (PGI).

U.S. Military Procurement: Untangling DFARS and Other Secrets of Selling to the U.S. DoD from Canada

Need to get up to speed on the basic mechanisms of the Canada-U.S. Defense Production Sharing Agreement (DPSA) and the laws and regulations governing U.S. DoD purchases in the Defense Federal Acquisition Regulation Supplement (DFARS)? Read our recent article to demystify the different elements of the procurement ecosystems as well as other secrets to selling to the U.S. DoD.  Learn More

There are a number of factors that make Canadian businesses especially well-positioned to sell to the U.S DoD, not least of which is the Canada-U.S. Defence Production Sharing Agreement (DPSA), which gives Canadian companies almost full access to U.S. military procurement opportunities.

In effect, the DPSA levels the playing field by waiving the Buy America Act and putting Canadian firms on equal footing with those based in the U.S. In addition, Canadian firms enjoy duty-free entry of their supplies and do not normally require export permits, which can quicken the process significantly.

Free eBook - Beyond Defence: A Guide for Canadian to do Business with the U.S. DoD

Selling to the U.S. DoD is a powerful way for Canadian companies of all types and sizes to elevate their business. Learn how to take advantage of this huge opportunity with CCC’s step-by-step guide: Beyond Defence: Securing opportunities for all kinds of Canadian businesses with the U.S. DoD.  Discover the unique advantages Canadian firms enjoy and how CCC can help you win U.S. DoD contracts.  Download Now

U.S. DoD Contracts: How CCC Can Help You Win the Bid

For over 65 years, the Canadian Commercial Corporation (CCC) has worked closely with the U.S. DoD to strengthen the North American defence industrial base and to meet the needs of the U.S. military. CCC is embedded in the U.S. DFARS regulations 225.870 to act as the prime contractor for all contracts awarded over USD $250,000. This gives Canadian firms almost unlimited access to the world’s largest military procurement market.

Of course the first step and half the battle is finding the right opportunity to bid on, and the CCC covers that as well: The Global Bid Opportunity Finder (GBOF) gives instant access to hundreds of thousands of opportunities on a single web platform.

Once the right opportunity to bid on is found, the CCC can serve as an ally in levelling the playing field by:

U.S. Defence Procurement: How Canadian Businesses Can Get “Bid-Ready”

When it comes to making Canadian contractor interactions with the U.S. DoD as smooth as possible, it’s all about the details. Read our recent article to discover the 6 key steps Canadian businesses need to take to get “bid-ready” for U.S. DoD procurements.

The CCA’s U,S, DoD Prime Contractor Program makes it easier for small businesses to do business with the U.S. DoD, by helping Canadian suppliers to navigate the procurement process and leverage the unique advantages afforded to Canadian firms under the DPSA and DFARS. Learn more about CCC.

For guidance on preparing a bid or proposal, download our eBook Seizing Opportunity: Developing a Winning Proposal for practical guidance.

If you’re ready to submit a bid or you’re preparing a proposal, you can book a 30-minute consultation via email with a CCC contract manager to ensure your proposal meets the criteria.