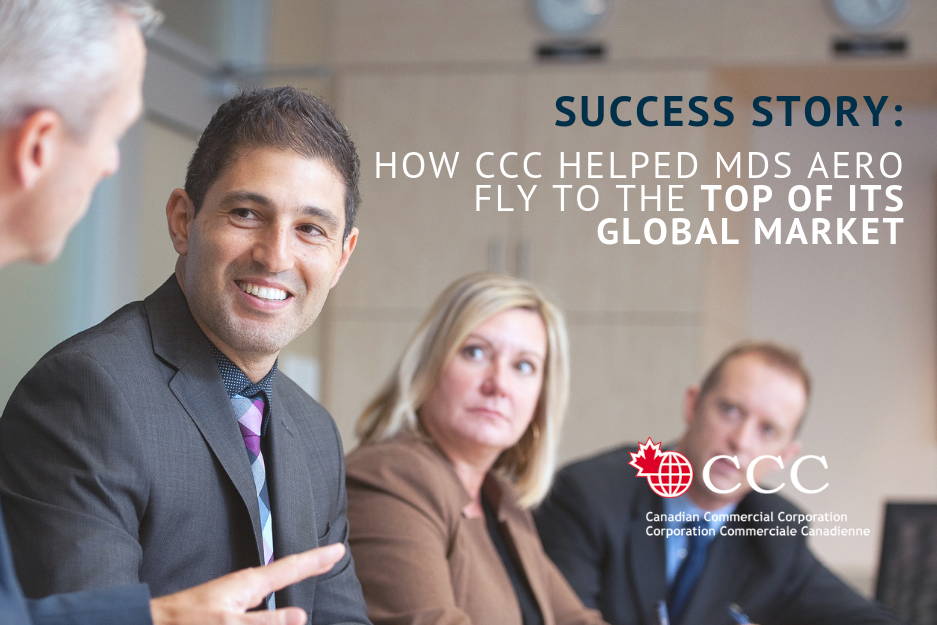 MDS’s first major international opportunity arose when Royal Air Maroc, Morocco’s national airline, wanted to build a test facility in Casablanca. The firm faced some tough competition: primarily two larger, more well-known and experienced players in the U.S. and Belgium, who had solutions ready to go. But the MDS team knew they could deliver. They just needed support to enhance their credibility.

CCC’s support as prime contractor was they key to help level the playing field, and its government-backed sovereign guarantee of contract performance made MDS a safe choice for Royal Air Maroc despite its small size and relative lack of experience.

“CCC basically secured that deal for us,” says Joe Hajjar VP, Global Business Development “Royal Air Maroc didn’t have to trust this tiny little firm. They could trust the Government of Canada.”

Thanks to CCC’s support and international relationships, MDS was able to secure the $40 million contract to build their first large-scale turnkey engine testing facility. Its construction, engineering and project management background helped ensure success. The facility is still in operation today, 25 years later, a testament to MDS’s excellent work.

Today, MDS builds testing facilities for aviation, power generation and marine customers across all three phases of engine testing: R&D, production, and maintenance, repair and overhaul. The facilities it constructs do everything from basic engine performance tests to highly complex and challenging scenarios that simulate extreme conditions.

The firm has even built a test centre in northern Manitoba for Rolls-Royce and Pratt & Whitney to subject their engines to extremes of cold that just can’t be replicated anywhere else.

Hajjar says the CCC contracting approach is ideal for this complex work: “What we sell is not a commodity. It’s a complex centre of excellence with a significant amount of technology and IP that requires a contracting structure that supports an iterative approach.”

The design process involves significant collaboration, coordination and multiple design reviews. For that reason, a standard RFP process, with requirements determined and set in stone from the beginning, is simply not effective. CCC’s G2G contracting approach allows a foreign buyer to work directly with MDS without going through a public tender process — providing space for the negotiations required to deliver a complex project in the national interest of a buying country.

PAVING THE WAY FOR INTERNATIONAL SUCCESS

Since its first deal with Royal Air Maroc, MDS has worked with CCC on another 12 projects with a total value of almost $165 million.

“We’re doing things there that have never been done before,” says Hajjar. “We’ll be testing new, next-gen engines using technology that doesn’t even exist yet.”

Hajjar credits CCC with helping MDS grow and encourages other exporters to take advantage of this unique service available in Canada. CCC sets Canadian companies apart and offers significant benefits to all parties. One of the biggest is helping relax otherwise prohibitive contract terms. Projects that require bonds of 5–15% and other securities often present tremendous financial risk for smaller exporters. CCC’s 100% government-backed contract performance guarantee de-risks the deal for all players.

MDS’s proven track record means they no longer rely on CCC to get them in the door, but CCC continues to provide invaluable negotiation support. Even today, sitting down with large international companies that bring armies of lawyers to the table can feel a little like David negotiating with Goliath, but with CCC at their side, Hajjar says MDS goes into negotiations feeling as big as their buyers.

“CCC put us on the international map,” says Hajjar. “Without them, we would not be where we are today.”