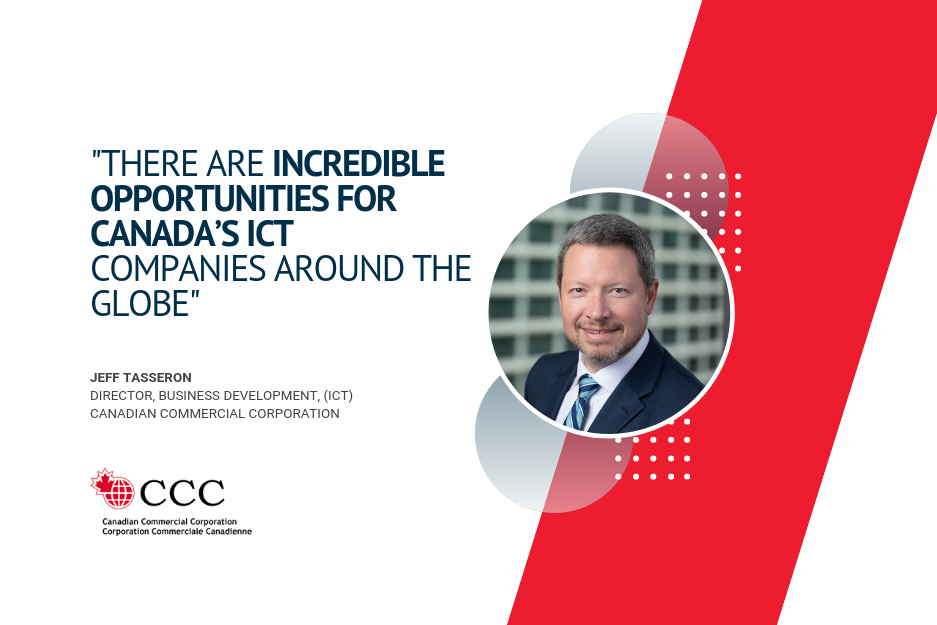 With 26 years of operational flying and strategic joint staff experience at Canada’s Department of National Defence, as well as diverse industry exposure, Jeff Tasseron brings specialist defence & security knowledge as well as a broad commercial perspective to his role as CCC’s ICT Sector Director. He describes what brought him to the corporation and how he helps exporters grow their business.

As a Naval Aviator in the Canadian Armed Forces, Jeff spent the bulk of his operational career deployed on shipboard, air and land operations around the world. Building on a wide variety of staff and command roles, he, oversaw more than $1.4B of joint command and control capital acquisition projects, led a combined industry-military review to help salvage a $5.4 billion aircraft recapitalization effort, and finished out his military career as a strategic advisor to Canada’s Chief of Defence Staff.  He’s used to the complexity of big deals, and understands the consequences of decision-making when both lives and livelihoods are on the line.

Jeff first became aware of CCC when he retired from the military and was working in air and naval business development.

“I was exposed to the CCC model shortly after moving to industry, and was really interested in how the government to government approach reduced risk and freed up operating capital that would normally be tied up in performance bonds and insurance,” he says. “When I heard CCC was diversifying its business development approach, and that there would be a renewed emphasis on enabling export opportunities in the aerospace and ICT sectors, I knew I had to try for the position.”

It took three decades working in aviation, defence policy and commerce to prepare Jeff for what he describes as the export battlefield. Competition is fierce, and Canadian firms have to leverage every advantage they can as they face of against multinational competitors.

The sector Jeff heads up is highly technical, with diverse pockets of specialization and widely varying market presence among Canadian companies. Small, medium and large Canadian ICT companies are known for innovation and competitiveness, and for offer a broad range of services and products — but many face challenges when competing against larger multinationals, and in markets that favour domestic producers, even when superior products may be available elsewhere.

“There are incredible opportunities for Canada’s ICT companies around the globe, and a big part of my job is to identify the most outward-facing and progressive.  Then, I work with them to build awareness of the CCC advantages, and to better understand if and where a government-to-government contracting model could fit their business strategies and priority pursuits,” he says. “Those businesses that will succeed, particularly in emerging markets, are the ones that can reinvent themselves in response to the changing world, effectively leveraging the full range of financial and contractual mechanisms available to them, while sustaining and enhancing their core competencies.”

In some ways, the CCC model is perfectly adapted to the challenges of the ICT business, Jeff reflects. In highly specialized industries, providing support to critical information and communication infrastructure that underlies the delivery of many key government, public safety & security services, anything that can be done to reduce financial and contractual performance risk benefits both buyers and sellers.  “CCC brings an additional level of diligence and confidence to transactions; with the Government of Canada standing behind their most critical deals, our industry partners have a powerful advocate, while our international clients enjoy the trust that comes from a Sovereign guarantee of performance.”

Jeff says he feels genuine enjoyment in helping Canadian companies move deals forward, and great satisfaction in playing a supporting role in getting contracts that benefit the Canadian economy signed.

“One of the things that really distinguishes the job here at CCC is the fact that instead of working for a single company, with a set focus or product line, I have the privilege of working with 50 or more companies – each with unique offerings across a diverse and rapidly evolving ICT sector.  Canada has a lot to offer in this marketspace – and we’re just getting started,” he says.

Are you looking to export an ICT product or service?