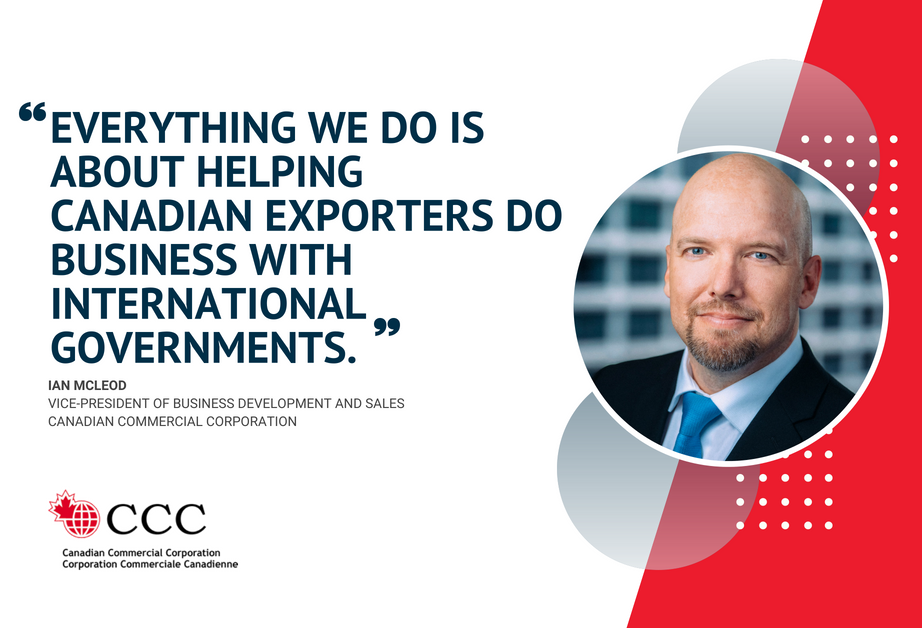 Ian McLeod talks diversification, opportunity and the single-minded focus he brings to his role of Vice-President of Business Development and Sales at CCC.

“Everything we do is about helping Canadian exporters to do business with international governments,” says McLeod. By “we” he means both his fast-growing business development team of more than 20 professionals and, more broadly, CCC as a whole.

With the Corporation’s ongoing diversification into new regions and sectors, the number of exporters CCC is working with is expanding significantly. In addition to its traditional role securing contracts for Canadian defence companies, today CCC works with a broad range of export-ready businesses whose leading-edge capabilities are in demand by governments worldwide.

CCC exporters are everywhere and across many sectors: in cleantech, energy and the environment, information and communications technology, construction, infrastructure and civil aerospace. All of these sectors are part of the CCC diversification strategy. McLeod says many companies can gain substantial credibility with buyers and financing partners by engaging with the Government of Canada through CCC.

“When selling to governments internationally, your competition isn’t just other companies: it’s whole countries. The involvement of CCC – the Government of Canada –  advocating for qualified exporters makes a Canadian sale more credible, more viable and more trustworthy in the eyes of international governments,” he says. In a highly competitive environment, there’s no doubt differentiating your offer with a government to government contract and a government-backed guarantee of contract performance can be a game changer.”

Over more than two decades in business development, business leadership and international competition, McLeod has seen the value CCC brings to Canadian exporters. His last role was as vice-president of business development at a company that had won contracts enabled by CCC in Germany and Colombia.

McLeod says he was attracted to the business development role at CCC because of the breadth of companies he gets to work with “I want Canadian businesses to know CCC’s first priority is helping Canadian exporters.” “From validating leads with buyers, to advocating for Canadian proposals to negotiating and signing contracts – we look for win-win-win scenarios that help Canadian exporters win contracts, help international governments deliver projects for their citizens and allow CCC to deliver on its mandate to grow trade for Canada,” he reveals.

“A conversation may show how we can help open doors and enable new business for your company.”