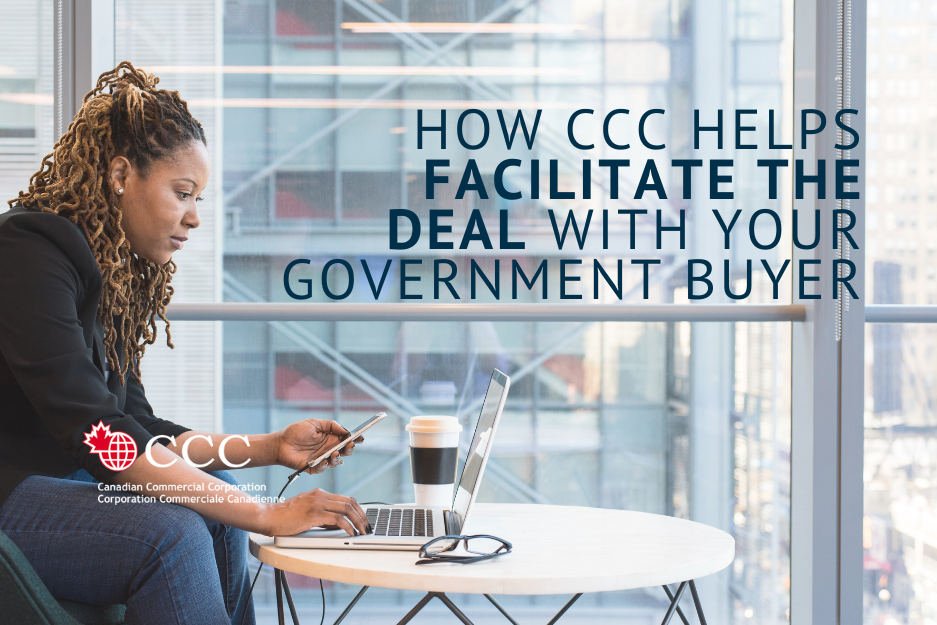 How CCC helps facilitate the deal with your Government Buyer

In our Better Way series, we dig deeper into the government to government (G2G) process and how CCC works with exporters to get deals done.

A key difference between G2G contracting through CCC and conventional procurement is that, in a G2G contract, CCC serves as the Prime Contractor. That means CCC signs the contract with the buyer on behalf of the Government of Canada. As the exporter, you’ll sign a sub-contract with CCC to execute the work of the overarching agreement.

“Our goal is twofold,” says CCC Export Sales Manager Antony Rizk. “First and foremost, we want to get a good deal for Canadian exporters, with terms and conditions acceptable to them. At the same time, we are also working to ensure the buyer is happy with the results.”

By considering both sides of the transaction and the strength of the deal overall, CCC is an effective advocate for Canadian companies — and protects Canada's reputation as an honest broker accountable for project delivery.

A lot of work happens before sitting down at the negotiating table with the buyer. Your CCC representative meets with you to review your draft proposal and confirm alignment on the proposed terms and conditions. The aim is to come to a starting position that both you and CCC are comfortable with — a united front.

“We know what tends to work for foreign government buyers — and what doesn’t — so we can make sure the starting negotiation position is strong and fair,” says Rizk. “Everything we do is in partnership with the exporters we work with and is aimed at achieving a contract win. We never impose terms and conditions unilaterally. It’s a joint negotiation, we’re working together for the win.”

When it’s time to meet with the buyer, Rizk says you should consider this your contract. You’ll speak to the technical details of your solution, and CCC will facilitate the contract negotiations.

“Our team knows a lot about contract law, but we fully respect exporters’ expertise when it comes to their own products and services,” says Rizk. “The technical details are a huge part of the negotiation, and we rely on our exporters to lead those parts.”

CCC will consult with you on pricing strategy, but you set the direction based on your business requirements. As a representative of the Government of Canada, CCC provides a level of reliability that can help buyers feel comfortable foregoing some of the risk mitigation measures they typically ask for. These can include contract guarantee instruments like bonds, holdbacks or advance payment guarantees. By calling on Canada’s AAA credit rating, CCC can often have these provisions waived and help keep the overall costs of the contract down.

An important decision in contract negotiations is which country’s laws will be used to govern and interpret the contract. Both the exporter and buyer need to agree on that point. CCC has negotiated acceptable arrangements for exporters with many government buyers trying to minimize their risk.

Once the contract with the buyer is signed, you’ll sign a sub-contract with CCC, which delegates responsibility for the fulfilling the contract terms to you and outlines how the contract will be managed. In general, we’ll oversee the transfer of funds to ensure transparency, appropriate use of funds, respect for anti-corruption policies, and manage the contractual obligations and issues that arise. You’ll handle any technical issues — unless they require a contract amendment which we will put in place with the agreement of all parties.

The key thing, says Rizk, is that CCC only ever signs a contract with a government buyer if you, the exporter, are satisfied with the provisions.

“At the end of the day, we’re here to help Canadian companies succeed internationally,” he says. “We make sure exporters are comfortable with what’s expected of them and commit to terms that give them the best change of success for contract delivery.”