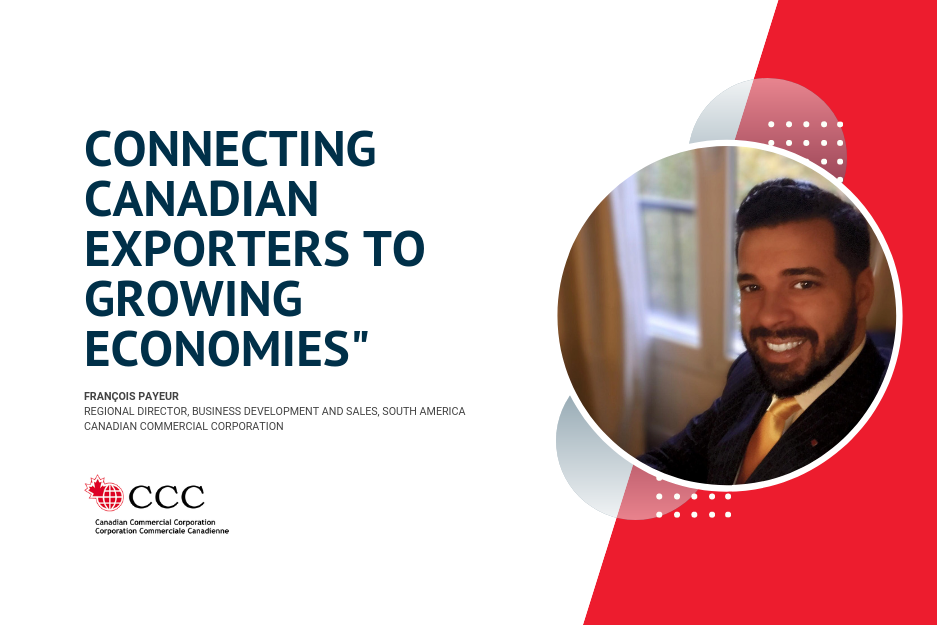 Canadian exports are in demand among the expanding economies of Mexico and South America. CCC Regional Director François Payeur explains why — and how CCC helps exporters access those opportunities.

Canada has a long history of trading with Mexico and South American countries. Our country has built a reputation for being a trustworthy trading partner by taking a collaborative approach to delivering innovative products and services, and also by having a commitment to ethical business practices that strongly supports the goals of governments in the region.

François Payeur helps Canadian businesses capitalize on that goodwill and benefit from the region’s forward-looking, growth-oriented economic surge. His role as CCC Regional Director is the latest in a career that included being Canada’s Trade Commissioner in Bogota and Vice-Consul in Morocco as well as heading up Global Affairs Canada’s desk for Western Europe. His significant contributions to Canada during his esteemed international career were recognized when he received the Queen’s Diamond Jubilee Medal.

“I’m used to operating abroad,” says Payeur. “With this mission, the focus is all about forging relationships with foreign governments — developing successful trade partnerships to help exporters sustain economic growth.”

He says the respect for the Canada brand in Mexico and South America is well earned. By partnering with CCC, countries can take advantage of a unique government to government contracting model that reduces procurement and performance risk.

“The value of that de-risking can’t be overstated,” says Payeur. “Governments in the region insist increasingly on transparency and structure in their projects. History has shown people here the devastating consequences of corruption, and there’s an incredibly strong will to change that.”

CCC works with buyers and exporters every step of the way: from initial meetings through negotiations and to the conclusion of the contract, including delivery and final payment. It solves any contract issues that come up and shields both government buyers and Canadian exporters from potentially unethical business practices.

Because Mexican and South American governments have worked hard to diversify their economies and generate trade, markets have opened up for Canadian companies looking to grow internationally. Canada became the first associate country member of the Pacific Alliance, a trade union founded by Colombia, Peru, Chile and Mexico in 2011. The Pacific Alliance, together with the South American Mercosur union, has resulted in integrated economies, reduced trade barriers, strengthened banking systems and improved competitiveness and access to global markets, all of which adds up to more opportunity for exporters.

“Those opportunities span virtually every sector you can imagine,” notes Payeur, “from defence and aerospace to infrastructure, information and communications and clean technology. And there is a real desire for Canadian-made solutions.”

Are you looking to export to Mexico or South America?

Contact CCC today to learn more about our government to government contracting model.