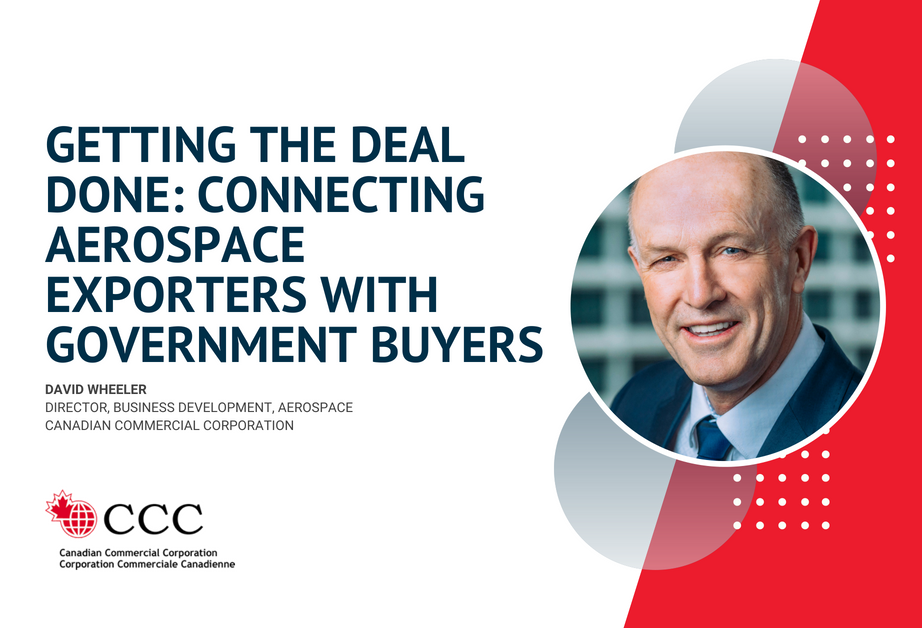 Former Canadian Armed Forces fighter pilot and retired Major General David Wheeler knows aircraft, the aerospace supply chain and how important the sector is to Canada—at home and abroad. All of that makes him ideal for the role of CCC Aerospace Sector Director.

Wheeler joined CCC after 33 years with the Canadian Armed Forces—including service as Deputy Vice Chief of Defence Staff in Ottawa and Commander of 1 Canadian Air Division in Winnipeg. His first stint at CCC was Director of U.S. Operations, a role that gave him a good grounding in the workings of the Corporation.

“Personnel are constantly changing in governments and in Canada’s aerospace companies,” Wheeler says. “So I need get out there and talk to new people who don’t know anything, or know very little, about CCC.”

Wheeler’s main message is that with its guarantee of contract performance, CCC arranges unique government to government contracts that assure purchasers of project fulfillment according to the terms specified. He says he wants to help Canadian aerospace firms get every advantage possible when facing off against competitors from other countries for government contracts.

“Canadian aerospace is really varied,” says Wheeler. “It’s full of companies of all different sizes with reputations for being competitive and innovative. Their services and products range across everything from maintenance and repair to complete aircraft and satellite systems.”

The sector also faces many unique pressures. It’s highly specialized, and companies must fulfill complex functional, safety and regulatory requirements. Added to those demands is the brutal competition faced at the international level.

“Anything I can do to help Canadian companies win foreign government contracts will ultimately help them remain successful and grow,” Wheeler says. “Governments are massive organizations, and it’s not easy to navigate through their buying bureaucracies, particularly if you’re new to exporting and or expanding into a new market.”

Exporters can take advantage of the experience, knowledge and specialists in the CCC so they can get to the right people—the ones that sign off on procurement decisions. What’s more is, foreign governments trust Canada as a reputable supplier of goods and services, and that alone often gives Canadian exporters an edge.

“I get the right people talking to each other, get deals done and solve problems along the way,” Wheeler says.

Because foreign buyers must meet CCC’s anti-corruption and other ethical requirements, Canadian aerospace exporters know they are engaging in deals that are transparent and responsible, minimizing risk and giving them peace of mind.

In many ways, Wheeler says his new job is like another military positing. “My mission is to help Canadian aerospace exporters; it’s that simple, and it’s that complicated. When I’m helping exporters, I’m helping Canada and Canadians. I don’t just like that; I need to be doing that.”

Are you looking to export an aerospace product or service?

Contact CCC today to learn more about our government to government contract model.