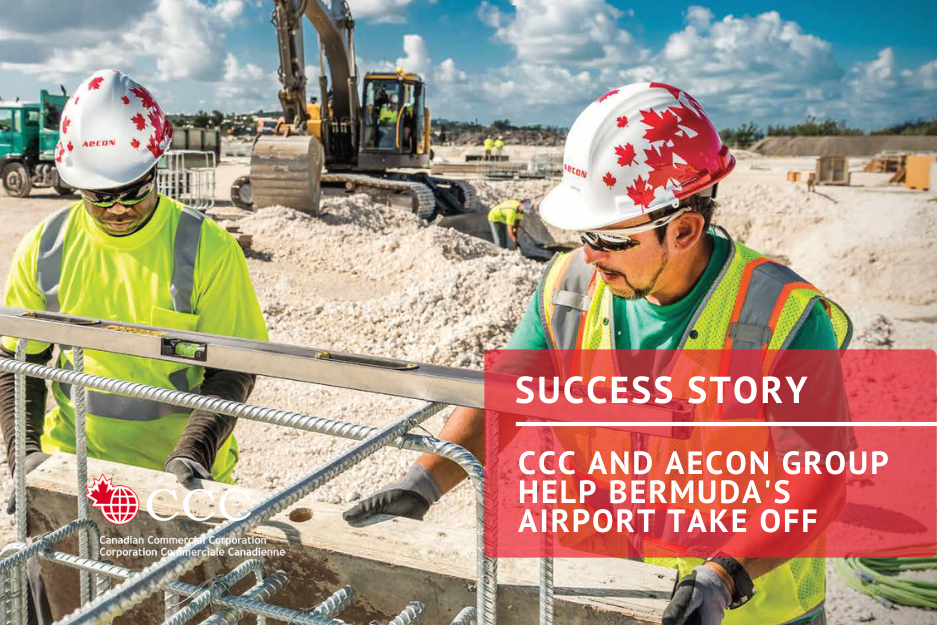 With the roof leaking into the arrival halls, Bermuda’s national airport was badly in need of an upgrade. Canada’s Aecon Group had the right solution for the largest infrastructure project in the island nation’s history. When CCC offered a government to government (G2G) contract, it was exactly what the Bermudian government needed to take the leap.

An airport in need of more than a facelift

Following the successful completion of an award-winning airport in Quito, Ecuador, Aecon was looking for another project to sink its teeth into. Bermuda’s airport terminal had been built shortly after the Second World War — and it showed. After being run by the U.S. military for decades, the airport was handed back to the Bermudian government in the 1990s. The government couldn’t afford to keep up with its maintenance, so the terminal developed a host of structural problems: hurricane damage, leaks, mould and more.

An island with relatively low air passenger counts, the Bermudian government couldn’t get a reconstruction project off the ground. Borrowing the money to build a new terminal wasn’t feasible, a retrofit wasn’t a long-term solution, and many construction companies weren’t interested in what they saw as a “small” airport project with limited revenue streams.

“Bermuda is a very developed, sophisticated market, but it still couldn’t get this project going,” says Luc Allary, CCC Regional Director for the Caribbean and Central America. “It needed a different approach, and that’s where we came in.”

A trustworthy partner for the long haul

CCC’s G2G contracting approach helped move things forward and de-risked the process right from the start. In a competitive tendering process, the Bermudian government would have had to spend heavily on defining specifications up front — and risk losing money if the bid process failed. Instead, through a G2G contracting approach, Aecon could work directly with officials to scope their needs and design a solution that fit perfectly both the need and the budget.

“The combination of the Government-to-Government procurement framework of the P3 commercial model is a unique offering brought to the table by the CCC and Aecon to facilitate the delivery of a tailor made solution for Bermuda,” said Steve Nackan, President, Aecon Concessions.  “Working with the CCC and the Government of Bermuda, Aecon is pleased to be delivering a world-class airport, as well as providing significant economic benefits to Bermuda.”

Under this PPP deal, Aecon took on the building of the new terminal and the necessary financing for its construction. The company will manage the airport’s operations for the next 30 years through a subsidiary, Skyport, formed specifically for that purpose. Aecon’s success in Quito served to further reassure Bermuda that the Canadian company could deliver what it promised.

“The guarantee from the Canadian government made all the difference,” says Allary. “Working with a reputable firm is one thing, but having the backing of a trustworthy government really resonated for them.”

A new standard for Caribbean airports

The $274-million construction project broke ground in April 2017, far enough away from the existing airport that it can continue to operate until the new terminal opens. Throughout the 40-month build, Aecon has used mainly local contractors, and almost 90% of Skyport’s airport employees are Bermudian.

Aecon incorporated state-of-the-art technologies into the design to ensure hurricane resistance and to maximize employee and client health and safety. Currently, the project is on budget and on track to meet its scheduled open date in 2020. Once completed, it will become the gold standard for small airports in the Caribbean market.

“Everyone has their eye on this project,” says Allary. “Other governments have already started reaching out to us because they have similar needs and want to know how this one worked.”