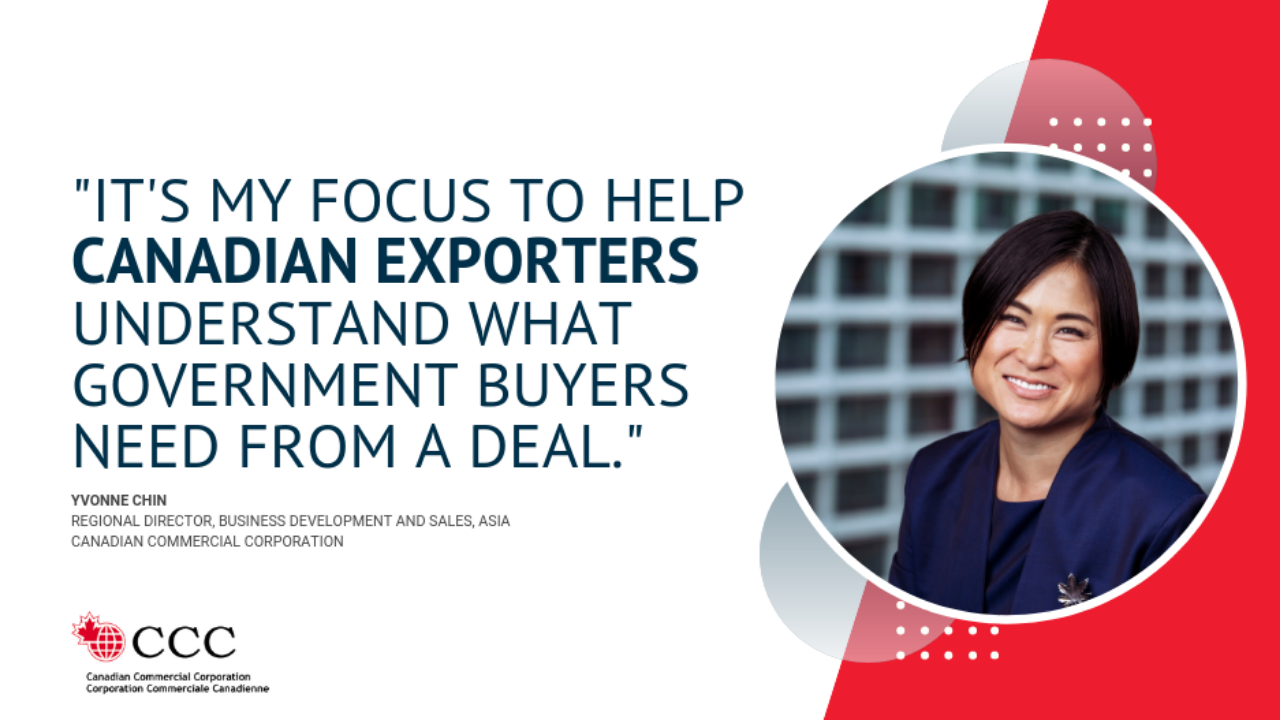 Bringing vast regional experience in Asia and beyond for Canadian exporters

CCC Regional Director for Asia, Yvonne Chin finds win-win solutions for Canadian exporters and for governments in Asia. She shared some of her thoughts on the growth occurring in the region and what that means for Canadian businesses.

With close to 20 years of experience in Canada’s commercial foreign service, Yvonne Chin has deep knowledge of Asia and the needs of local governments throughout the region. Her extensive Government of Canada contacts and highly effective approach to working with trade commissioners and ambassadors are valued by Canadian exporters in all sectors.

“I really focus on helping companies understand what government clients need from a deal,” she explains. “The companies I work with are in it for the right reasons. They want to see the buyer happy and get the aftercare service they need. And they appreciate the credibility and weight the Canada Brand brings to their business.”

Yvonne’s path to international trade began, on the recommendation of friends and one of her professors, with an application to Canada’s foreign service. She was one of the youngest people ever to be accepted into the service that year — starting a journey that eventually took her to the other side of the world, to the region where her parents were born.

While working on a project back in 2008, she became acutely aware of CCC and the value its government to government contracting approach brought to Canadian exporters. When the regional position stationed in Bangkok, Thailand, became available, she was determined to win the job.

“I knew it was going to be a bit crazy,” she says. “The region is so big. It covers a huge territory — from India to Korea to New Zealand and everything in between. I’ve been living out of a carry-on.”

Yvonne points out there are no fewer than 23 Asian countries, each with their own culture and business practices brimming with opportunities for Canadian exporters. Doing business in Asia is very different than in North America. “Exporters who want government contracts will be helped by tapping resources with experience in the region,” Yvonne says.

Despite the intricacies of doing business in Asia, there is no shortage of opportunities — which Yvonne is dedicated to helping Canadian exporters seize.

“There is so much happening economically and so much demand,” she says. “Canada is a respected trading partner, and with the help of CCC’s expertise and government to government approach, Canadian exporters have an enormous potential market to serve.

Are you looking to export to countries in Asia? Contact us today to learn more about our government to government contracting model.